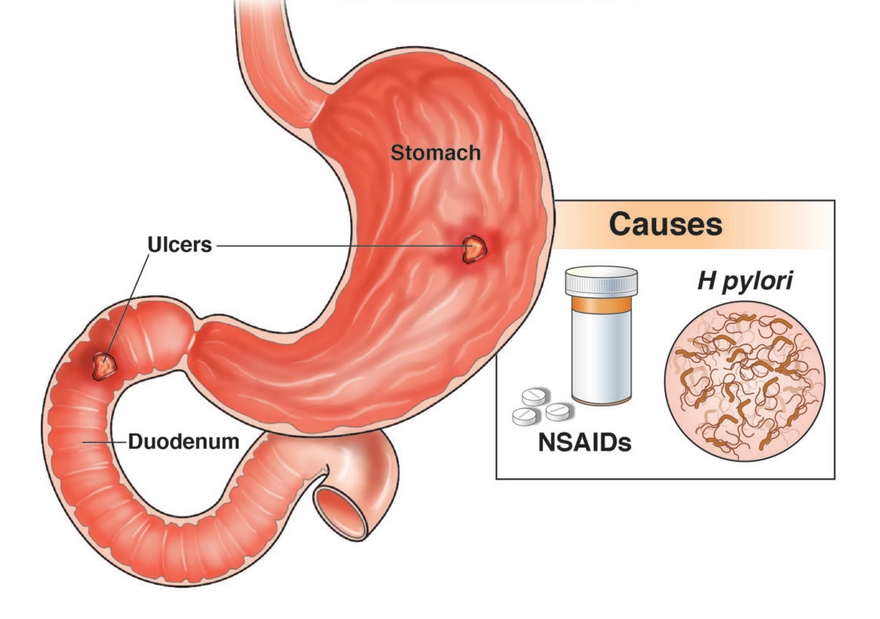 What are the symptoms of a peptic ulcer?

A dull or burning pain in your stomach is the most common symptom of a peptic ulcer. You may feel the pain anywhere between your belly button and breastbone.

The pain most often:

Less common symptoms may include:

What causes a peptic ulcer?

Causes of peptic ulcers include:

Sometimes peptic ulcers are caused by both NSAIDs and H. pylori.

How do NSAIDs cause a peptic ulcer?

Everyone has two enzymes that produce chemicals in your body’s cells that promote pain, inflammation, and fever. NSAIDs work by blocking or reducing the amount of these enzymes that your body makes. However, one of the enzymes also produces another type of chemical that protects the stomach lining from stomach acid and helps control bleeding. When NSAIDs block or reduce the amount of this enzyme in your body, they also increase your chance of developing a peptic ulcer.

How can your diet help prevent or relieve a peptic ulcer?

Researchers have not found that diet and nutrition play an important role in causing or preventing peptic ulcers. Before acid blocking drugs became available, milk was used to treat ulcers. However, milk is not an effective way to prevent or relieve a peptic ulcer.

When should you call or see a doctor?

If you have an ulcer, avoid the things that make your ulcer pain worse. This means to avoid spicy foods, alcohol and smoking. If you have to take aspirin or ibuprofen for chronic pain, talk to your doctor. He or she may suggest an alternative.

You should call or see your doctor right away if you

These symptoms could be signs that a peptic ulcer has caused a more serious problem. Peptic ulcers will get worse if not treated. Treatment may include medicines to reduce stomach acids or antibiotics to kill H. pylori. Antacids and milk can’t heal peptic ulcers. You may need surgery if your ulcers don’t heal.